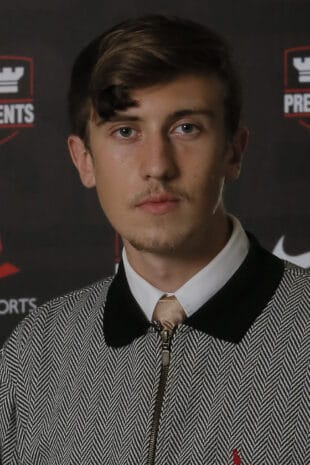 “(Becoming an) All-American was something incredibly special for me…to finally do what I hadn’t been able to do after so many tries in my last race wearing a Washington & Jefferson uniform is something that I will cherish forever.”

Harley Moyer ’18 began running because he relished the winning aspect of the sport. The competition drove him to accomplish one goal and then attack another. During his career as a W&J President, Moyer won often, on and off the course.

“Originally, I liked to win, I liked to be good at what I did, and I figured out that dedication could get me to those goals,” said Moyer. “Over the years, I began to enjoy the process much more. Now, I really do think I run because I enjoy the act of running, and it has become an important part of my life.”

During his first three years on campus, Moyer built a resume full of tremendous accomplishments. He was twice selected as a Google Cloud Academic All-American and had a 3.93 grade-point average. Moyer was named the 2017 PAC Cross Country Runner of the Year and was a national qualifier in both cross country and track & field. He was also a member of numerous honor societies including Phi Alpha Theta History Society, Pi Delta Phi French Society, Phi Sigma Tau Philosophy Society, and Phi Beta Kappa.

Despite all of those accolades, his focus was on the hurdles he and his teammates had yet to clear. The Presidents had come so close to capturing the first PAC cross country team title in school history in 2017, falling just two points short. Individually, Moyer was one placement and less than a second shy of becoming the first cross country All-American at the NCAA Championships.

Moyer concluded his studies at W&J in December 2018, completing his academic requirements a semester early. He majored in history, coupled with minors in French and philosophy. His academic achievements are equally as impressive as the ones he accomplished in his running shoes. He was recognized as an Alpha Scholar and claimed multiple academic awards, including the Robert L. ’40 and Connie Ceisler Pre-Law English award, the Henry Willson Temple Prize, the Pete Kimmel Prize, and the Paul L. Reardon Award for student-athlete leadership.