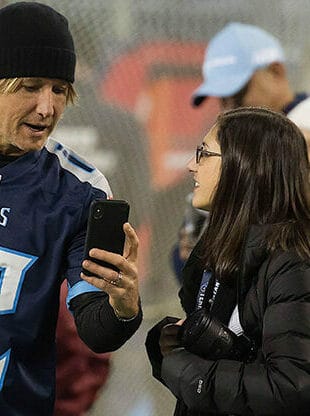 W&J made me think in a different way in terms of thinking outside the box and being a well-rounded student. I think that really helped me gain the confidence to know that I am capable of anything.

A career in sports can be a tough field for women to break into, but Jourdan Gottlieb ’14 defied the odds as she forged her own path in sports communication – a path that led to a job on the social media team for the Tennessee Titans.

That path was not always a clear one. Although Jourdan had an interest in working in the industry after completing two internships and graduating from Washington & Jefferson College (W&J) with a degree in computing and information studies, the opportunities she was searching for were tough to come by. A few months after graduation, she took a position with a water treatment company in Canonsburg.

It wasn’t her dream role, but she gained a lot of experience and after about a year and a half, she found her window into the world of sports: a digital media internship with the Pittsburgh Steelers. Jourdan thrived in the role for more than a year, creating graphics, social media strategies and campaigns, and assisting in managing social media platforms. With the support of her supervisors at the Steelers organization, she pursued and secured a social media graphic design position with the Pittsburgh Penguins.

While she enjoyed working with the Penguins, she missed working in football and social media. So, when a role opened up in the Tennessee Titans organization for a social media assistant, she went for it.

“I reached out to my former bosses at the Steelers and told them I was applying for the position with the Titans,” Jourdan said. “They were happy to write recommendations since I showed such incredible drive and passion during my internship. I knew this position was meant for me.”

In her current role, Jourdan maintains the Titans’ social media presence, monitors and implements developing social trends, and works closely with players, coaches and other departments to create engaging content for fans.