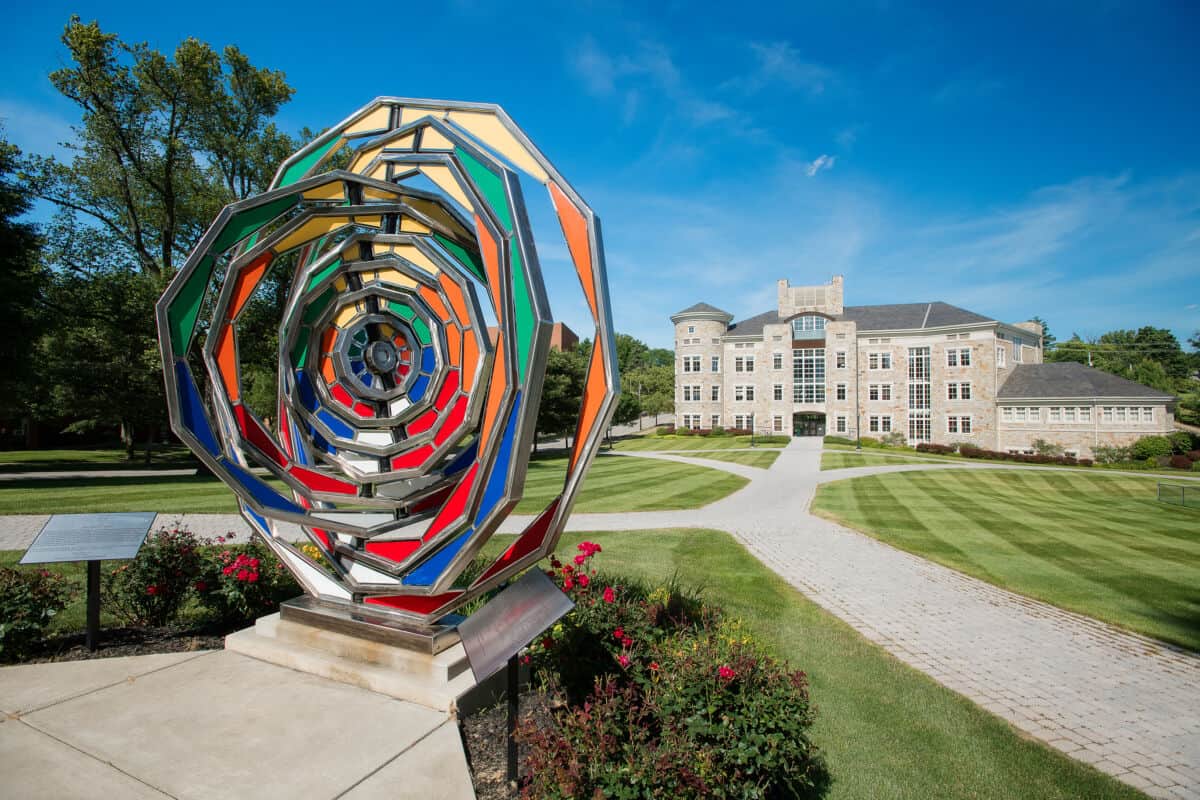 Remembering 1970, the year W&J opened its campus to women – and the legacy it created

This time of year, white snow blankets the campus lawn, creating a bright and contrasting backdrop for the kaleidoscopic stainless steel and glass polygon hoops of the sculpture that changes kinetically, with the touch of the wind or creative hands. Without the snow, this fixture of W&J’s landscape for the past six years almost begins to blend in with its surroundings, much like the fully integrated blend of young men and women who crisscross the campus daily between classes today. Almost.

Chicago artist Guy Bellaver designed the 12-foot diameter sculpture in 2014, after winning a public art competition that would honor an iconic year for W&J – a no-turning-back year that would change the face and future of the College forever. Its title, simply: “1970.”

1970 was the year when W&J opened its campus to women for the first time after nearly 200 years as a male-only institution of higher education. This year, W&J celebrates the 50th anniversary of that transformational moment in our long history.

This decision was discussed, debated, questioned and studied over the years by the College’s leadership, contemplated by the all-male student body, and driven largely by the economic realities of declining enrollment, the Vietnam war draft, and growing competition from institutions that already were co-ed. The College’s Board of Trustees made its final decision during their meeting on Friday, December 5, 1969, and the work of recruiting new students began.

The College’s student newspaper, the Red & Black, ushered in the new era in the January 3, 1970, edition with this rather dubious headline: “The New Jaymen,” and its editorial team minced no words while setting their expectations for the changes. “…It can be noted that we look forward with some interest to what we hope will be the ‘humanizing’ of W&J,” the editorial stated.

That fall, 77 female freshmen, along with 39 other female students – only about 12 percent of the College’s total enrollment of 976 – arrived on campus and, simply by virtue of being there, changed everything.

It took time, but their arrival would eventually change the way faculty taught and administrators led. It would raise the academic bar for all W&J students and open the door to female professors and administrators, women’s sports opportunities, campus sororities, multi-generational student legacies, and storied careers in business and science. It would prove a commendable beginning for both the College and a fraternity of women leaders who consider themselves fortunate enough to have been part of that first co-ed graduating class, the Class of 1974.

Not surprisingly, the change also drew its share of dissent. As the female students arrived at their dormitory in September, for instance, they were greeted with a sign stretched across the building across the street that declared, “Co-eds, go home!”

Students from Chatham College, a women-only institution at the time, added to the dissent with their own sign, according to Betsey Hurwitz-Schwab ’74, a current W&J trustee. It stated, “If you want an education, go to Chatham. If you want an MRS, go to W&J.”

But as Hurwitz-Schwab adds, “Despite the fact that there were so few of us, we stuck together pretty well.” And so they did.

Following W&J’s 40th anniversary celebration of going co-ed, Hurwitz-Schwab and others led a committee of alumnae to recognize the transformation that had taken place over the years, thanks to the W&J leaders and students who embraced the co-ed opportunity.

This movement generated the public art competition that resulted in the now-iconic “1970” statue on campus, which was dedicated in October 2014.

Notably, the statue is located near the Howard J. Burnett Center, which is named for the College’s 10th president, whose presidency began in 1970 during the transitional period. Next to the sculpture, a commemorative dedication plaque sums up the “tumultuous” year of change for the school and for all who have attended since then.

The sculpture, according to the inscription on a plaque next to the sculpture, “commemorates the sweeping changes that took place that academic year. Each of the interior eight polygons can be turned in relation to all the others, a metaphor for how one change brings about many others. ‘1970’ is dedicated to that time, and to the commitment of Washington & Jefferson College to maintain its place among the best liberal arts colleges in the nation. MOTION IS CHANGE. CHANGE IS MOTION.”

To capture a glimpse of that unique moment in time and the effect it has had on the College and its students since then, we talked with Hurwitz-Schwab and a few other notable alumnae to share their experiences. While each story is a bit different, all involve opening doors to opportunities for themselves and others to follow.