Skip to content
Home / Magazine / “The Right Education of Youth”

“The Right Education of Youth” 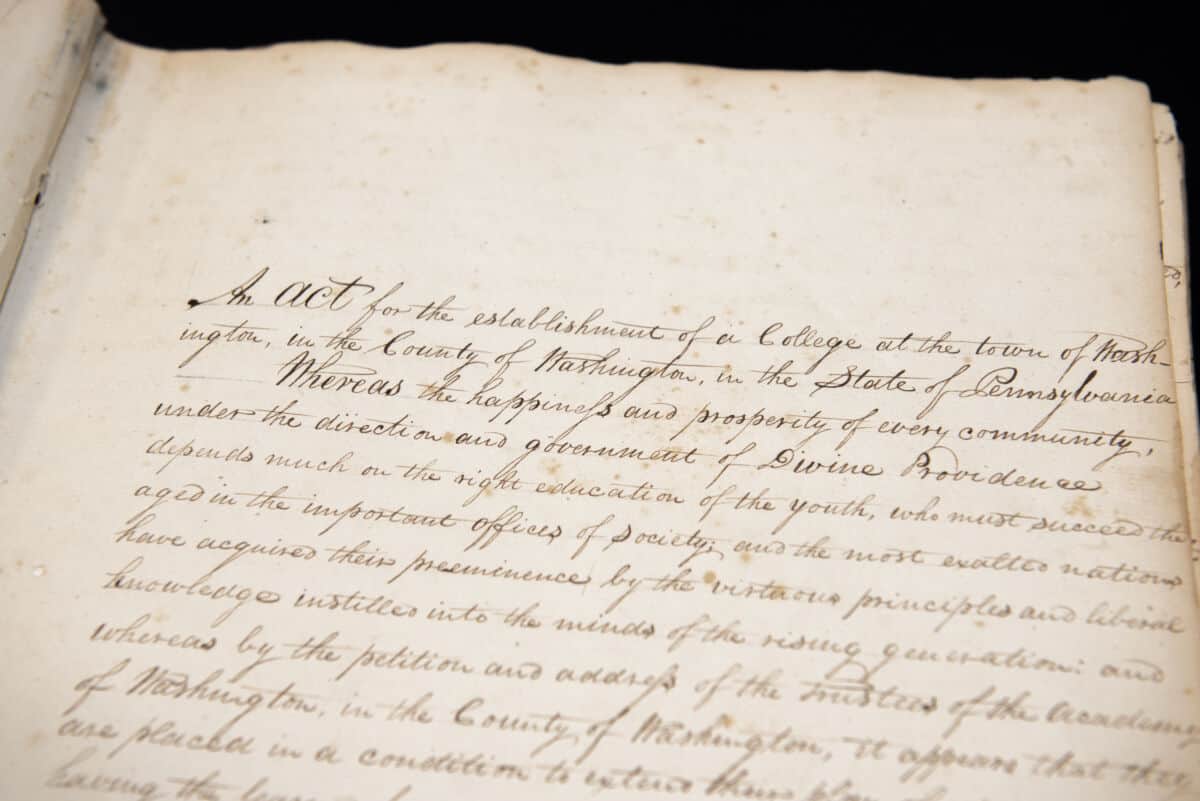 When the minutes for the first meeting of The Washington College were being taken, the founders could hardly have envisioned that their work would leave a centuries-long legacy.

What they did have was the prudence to realize that education was needed to make the recently founded country a success.

The notes of the act to form The Washington College and establish its trustees open with: “Whereas the happiness and prosperity of every community under the direction and government of Divine Providence depends much on the right education of youth, who must succeed in the important offices of society; and the most exalted nations have acquired their preeminence by the virtuous principles and liberal instilled into the minds of the rising generation…”

The notes regarding the formation of “an Academy or Public School” granted 5,000 acres were taken in 1781 in Philadelphia with the approval of the Senate and House of Representatives of the Commonwealth of Pennsylvania. The next meeting was held in Washington, and The Washington College was established in September 1781 “for the education of youth in the learned and foreign languages, the useful arts, sciences, and literature…as it is likely to promote the real welfare of this state, and especially the Western thereof…”

Today these original notes live on, bound in a large book and preserved in the Learned T. Bulman ’48 Historic Archives and Museum.

This diploma from Washington College was issued to Johannem A. Wills in 1837. The document is written entirely in Latin, a tradition that continues today at W&J (though in recent years an English version has also been issued). Signatures of professors can be found in the bottom corner, to the right of the silk ribbon, and signatures from some of his 19 classmates can be found on the rear of the document.

A signed blank diploma from Jefferson College in Canonsburg, also in Latin, dates from the year 1800.

Looking to the past with John McMillan

Items belonging to one of W&J’s founding fathers

Some of the earliest items in the archives belong to one of Washington College’s founding fathers, John McMillan. The archives is home to a silver frame pair of glasses, a pewter mush spoon with the year 1776 engraved on it, and brass medicine or money scales, all donated by Elizabeth McMillan McDowell of Canonsburg.

About the Learned T. Bulman ’48 Historic Archives and Museum

The Learned T. Bulman ’48 Historic Archives and Museum can be found in the basement of the Clark Family Library. The library’s renovation in 2018-19 included significant upgrades in storage from the previous facility, allowing greater preservation of and access to the College’s centuries of historical materials.

The archives serves as the collective memory of Washington & Jefferson College, from the inception of John McMillan, Thaddeus Dod, and John Smith’s log cabin schools in 1781 to the present. It is the official repository for the College’s permanent records and gathers documents, photographs, moving images, audio, small-scale publications and other original materials from all aspects of campus life. In addition to College-related materials, the Local Heritage Collection collects diaries, land deeds, ledgers, legal documents, letters, maps, and other original local history items from the Washington area not directly related to W&J.

Kelly Helm, MLIS, MA, serves as the archivist, with assistance from student workers. The work of the archives ranges from assisting professors and classes with College research, providing reference information to staff and alumni, working with off-campus researchers and local historical organizations, and preserving the historical documents and artifacts of the College for future generations of Presidents.