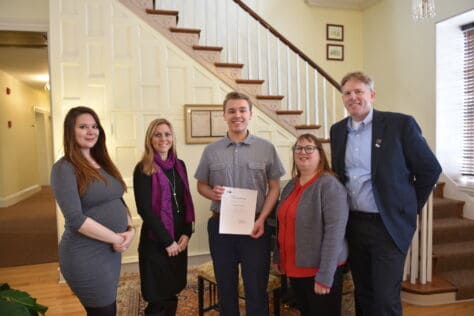 The $2,500 award will go toward funding Brendan’s term abroad in Cologne, Germany. Representatives from GABC came to W&J to present Brendan with the scholarship.

Brendan, a chemistry and German double major, was excited to learn of his win.

“It was pretty awesome. I’m so glad I won,” he said. “I had the support of my W&J professors. Without them, I wouldn’t have known about the scholarship, or have the skills to earn it.”

Brendan plans to study both his interests in science and language while abroad, and hopes to do scientific research in Germany following graduation. The ability to pair his passions through his study at W&J has been a vital part of his education.

“Science and a language major marry together nicely,” Brendan said. “A lot of double majors with a language look for that, and W&J makes it possible.”

The Computational Sciences concentration aims to make CIS courses more accessible to students with majors outside of the program.

WASHINGTON, PA (May 4, 2022)—A year-long research project conducted by Washington & Jefferson College students, faculty, and staff will be on display this week when...