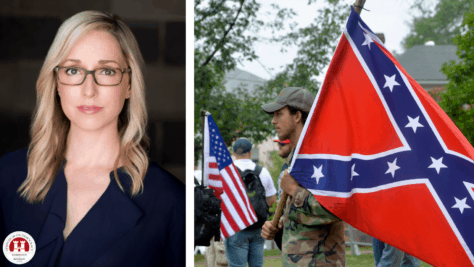 In an examination of recent history incorporating her research as a “historian of the present,” Kathleen Belew discussed the recent rise in prominence of the white power movement in the United States and the history of the fringe movement from its roots in the mid-20th century that culminated in the Jan. 6 insurrection at the capitol. She shared her research Feb. 17, 2021 during Washington & Jefferson College’s fourth annual Symposium on Democracy.

“You’ll notice we already have conflicting stories of what happened on January 6. What we saw, though, is really clear and will help us go a long way to understand reconciliation,” Belew said at the beginning of her talk. “We saw three strands of conservative activism: the Trump base, the radical conspiracy theory or Q Anon group, and the organized white power movement. The capitol attack was a show of force put on by this third group. It uses infrastructure that has been in place for decades, if not generations.”

Belew challenged the narrative that the violent acts of that dark day were perpetrated by “a few bad apples” and highlighted the history of white power activity in the country—specifically calling out the Oklahoma City Bombing in 1995 and the surge of white nationalism after the 2016 events in Charlottesville, Va.

She pointed out that this movement has found ways to operate and network through technology—using pre-internet message boards like Liberty Net dating back to the early 1980s—which has easily adapted to more prominent social networking platforms in our current time.

White power has also found a way to survive by adopting a “leaderless movement” model that allows the development of smaller cell groups to commit or plan violent acts, as was seen with the militia plot to kidnap Michigan Governor Gretchen Whitmer. Using this model, Belew asserts, has perpetuated the “few bad apples” narrative to a dangerous degree, as attacks do not long stay on the public conscious and are not attributed to the larger group of white supremacists. This also has allowed the public to form an image of a group of peaceful conservative protestors alleged to be present at events like Charlottesville that does not exist.

“President Trump gave that infamous soundbite about there being very fine people on both sides,” Belew said. “To his credit, in the full comment, he does not say he’s referring to white nationalists and neo-nazis, and he condemns those groups. The problem is that the ‘very fine people’ he’s talking about are the imagined group who just want to peacefully protest statue removal.”

To combat the dangerous rhetoric of the movement and help deradicalize those who have been swept up in its misinformation campaigns online and in their communities, Belew encouraged those in attendance to pay attention to and take note of the acts of violence being committed by white power activists and make sure to discuss the implications and outcomes of these terrible moments within one’s inner circle.

“I place my hope in the fact that we are at a moment of attention to this problem that has never happened before,” she said. “We need big thinking about truth and reconciliation. Those stories we tell together are really important for the kinds of change that will be possible.”

WASHINGTON, PA (March 4, 2022)—In the United States, it can be difficult to acknowledge that America’s democratic republic has often failed to protect some groups...