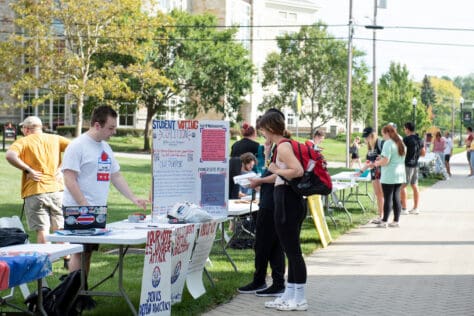 According to the National Study of Learning, Voting, and Engagement (NSLVE)’s 2020 Campus Report, 73.7% of all eligible Washington & Jefferson College students (otherwise known as The Presidents) voted in the 2020 general election, while only 66% of students at all other institutions turned out to the ballot box.

Mirroring a nationwide surge in voter turnout, that percentage jumped 17.7% from 2016—nearly 5% more than it did for other institutions, which delighted W&J’s politically engaged students.

“It’s really thrilling because there are days when…you think that what you’re doing doesn’t have an impact, but this shows that we have actually made a change,” said Isabelle Kratz, a senior at W&J and the vice president of the W&J Student Voting Coalition, of the coalition’s and college’s efforts to get out the vote.

Despite the pandemic, college clubs, organizations, and athletic teams came together in 2020 to host voter registration competitions, Instagram-live education sessions, and a student voter forum that featured student speakers from across the political spectrum.

Even professors got in on the action.

“I reached out to a couple of my professors and just said, ‘Hey, would you be willing to give me a couple of minutes to speak to the class about [voting],’ and most of them were very willing and encouraged me,” said Kratz, an international relations and Spanish double major. “A couple of them even sent out an email to the class, just reminding them to get registered to vote or send in a mail-in ballot.”

Nickolas Bartel, a junior political science, environmental studies, and Spanish triple major, and the president of the Student Voting Coalition, said the push to vote went beyond any individual.

“We have a very close community [at W&J]…, and it sort of creates a voting culture,” he said, noting that voter registration is now included in first-year orientation and that the college hosts and annual Symposium on Democracy. “The school already has this on their mind.”

Though Kratz and Bartel will be graduating soon, they hope that students at W&J will continue in their pursuit of democracy.

“Studies have shown that if you vote once or twice, you’re more likely to continue to vote because you’ve actually created that habit,” Bartel said. “As long as the Student Voting Coalition is around, as long as the administration is around and has democracy as a core element, I think we will see [voter turnout and civic engagement] continue to rise.”

W&J will induct 24 members of the Class of 2021 into Phi Beta Kappa, the country’s oldest and best-known honor society.