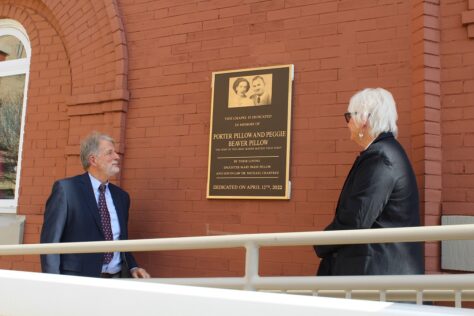 WASHINGTON, PA (May 2, 2022) – Michael Crabtree, Ph.D., a psychology professor at Washington & Jefferson College, has extended the ethical leadership values that he teaches to his students into the Washington community.

Crabtree, who has taught at W&J for 49 years, serves as the board vice president for the Washington City Mission, a local nonprofit that offers food, shelter, counseling, and other Christ-based services to help restore the homeless to independent living.

Crabtree and his wife, Mary Pillow, have supported the City Mission since 1995, resulting in the Mission dedicating its chapel as the “Porter Pillow and Peggie Beaver Pillow Chapel” in honor of Pillow’s parents.

Crabtree was also instrumental in the dedication of the “Crabtree-Kovacicek Veterans House” in 2018. Crabtree’s commitment to veterans’ needs was partially inspired by his work as the principal investigator on a $6 million Department of Defense research grant that examined the psychological needs of military members who were returning from the Middle East.

“The Mission focuses on people who are homeless and who often have substance abuse problems, which are populations that are underserved by other service organizations,” Crabtree said.

While Crabtree and Pillow are sincerely grateful for the work being done at the City Mission, the Mission is also thankful for their continued support.

“I know of no two people more willing to invest in the future of City Mission than Dr. Mike Crabtree and Mary Pillow,” said City Mission’s Chief Development Officer, Dr. Sally Mounts. “Their unwavering generosity will impact the lives of thousands of homeless men and women for decades to come. We’re incredibly blessed to have their support.”

Crabtree’s commitment to the Mission originates from his belief in the ethical values that the Mission perpetuates, which is something that he also incorporates into his teaching.

“Ethics should be at the front of students’ minds when conducting psychological research,” he said. “There is also a commonality between the Mission’s values and the College’s values. At W&J, our ethical leadership value teaches students to be sensitive to the different needs of others, which is also embodied by the City Mission.”

Crabtree’s commitment to the City Mission has also spread to others in the W&J community, as his students have completed numerous psychological and clinical internships there.

Crabtree is sincerely thankful to the other W&J staff members who have begun volunteering at the City Mission, such as Sharon Kolesar, director of human resources, and Jason Kilgore, Ph.D., associate professor of biology.

“W&J’s goal is graduate students who make substantial contributions to their communities, so I am happy to see our students and staff getting involved in community organizations like the Mission,” Crabtree said.

WASHINGTON, PA (May 24, 2022)—Washington & Jefferson College gave its nearly 300 graduates a grand sendoff on Saturday, with speeches from dreamers-turned-doers at its 2022...

WASHINGTON, PA (June 6, 2022)—Recent W&J alumna Rosa Messersmith ’22 is not throwing away her shot. Or rather, her many shots, clips, and reels.