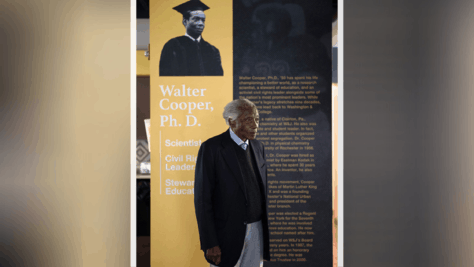 Dr. Cooper, who at 92 years old has remained active in the W&J community, was honored during a private ceremony held on the W&J College campus on Oct. 2, with friends, family and students in attendance.

“It is indeed an honor [from] this college, which played such a major role in forming my philosophy of life and also provided me with an education that provided a foundation for not only a rewarding pursuit of science and technology, but also provided me with a great interest in the humankind and the problems which our nation faces, and especially [those] the minority of which I’m a part has faced,” Dr. Cooper said.

The former Beau Hall, which recently underwent a $1 million renovation, was chosen for rededication for a number of reasons. The original name referred only to the street where it is located, thus presenting an opportunity for a more meaningful identity. Additionally, the hall occupies a prominent location on campus and is home to first-year students who enjoy its common area, where the most significant renovations were made. A portrait of Dr. Cooper and a prominent art wall describing his accomplishments has been placed in this popular space to introduce new students to the life and values of one of our most respected graduates.

During his opening remarks, President John C. Knapp, Ph.D. said the first floor of Cooper Hall is the principal location where students at the college come to know each other and make friends, and now from this point on, it will also be the place where they come to know Walter Cooper. He also read comments from alumni, some of whom were classmates with Dr. Cooper, who praised his activism and humanitarian work as well as his friendship.

“The list goes on of accolades from those who know that our students will now have the opportunity for generations to come to know about a man who is indeed an ideal role model for W&J students,” Dr. Knapp said.

A native of Clairton, Pa., Dr. Cooper majored in chemistry and was a star athlete and student leader at W&J, where he also began his activism. In 1949, he and other students organized sit-ins to protest segregation in the City of Washington. He found support at W&J for his activism as well as his academics.

“It was a welcoming attitude on this campus. I knew professors who were not involved in teaching me, but actually were extending a welcoming hand to my presence on campus, and I think that has enriched my experience here at Washington & Jefferson College,” he said. “I could tell you so many different human relations stories that really tied me forever to this great institution.”
Dr. Cooper went on to become the first Black student at the University of Rochester to earn a Ph.D. in physical chemistry and was immediately hired by Eastman Kodak, where he spent 30 years advancing science. He holds three patents for his inventions.

Dr. Cooper was heavily involved in community development and civil rights issues from an early age and served as president of the Rochester NAACP. Following the 1964 Rochester race riots he founded the area’s first chapter of the Urban League in 1965. At the height of the civil rights movement he worked with leaders including Martin Luther King, Jr. and Malcolm X, and in 1964 took a leave of absence from Eastman Kodak to form an anti-poverty agency called Action for a Better Community (ABC). He was also a leader of the Baden Street Settlement, a non-profit organization working with northeast Rochester residents to improve their quality of life. His activism also extends abroad, and he was recognized with the Chevalier of the National Order of the Republic of Mali for his work to improve the health, agriculture, and economy of the developing world.

Dr. Cooper served on W&J’s Board of Trustees for many years and was elected Trustee Emeritus in 2000. The College conferred on him an honorary Doctor of Science degree in 1987. He also served as a Regent of the State of New York, and his efforts to improve education were recognized by the Rochester City Schools when an elementary school was named Dr. Walter Cooper Academy. The University of Rochester recognized his “outstanding achievement and notable service to the community, state and nation” with its 1994 Hutchison Medal. In 2008 the university awarded him its Frederick Douglass Medal for his work “to open opportunities for all people in corporate America, in classrooms and in the world.”

“My life was shaped, my life was enriched, and my life led to dedication of other human beings based upon my early experience at Washington & Jefferson College,” Dr. Cooper said. “This is an honor that I will cherish forever and I will pass it on to my children and hopefully my grandchildren, and generations of Coopers afterward.”

W&J will honor alumnus Kenyon R. Bonner ’94, vice provost and dean of students at the University of Pittsburgh, with the 2017 Maurice Cleveland Waltersdorf...

WASHINGTON, PA (June 5, 2020)–Though our Commencement festivities have been postponed, we’re still excitedly celebrating the Class of 2020 and all of their accomplishments. As…