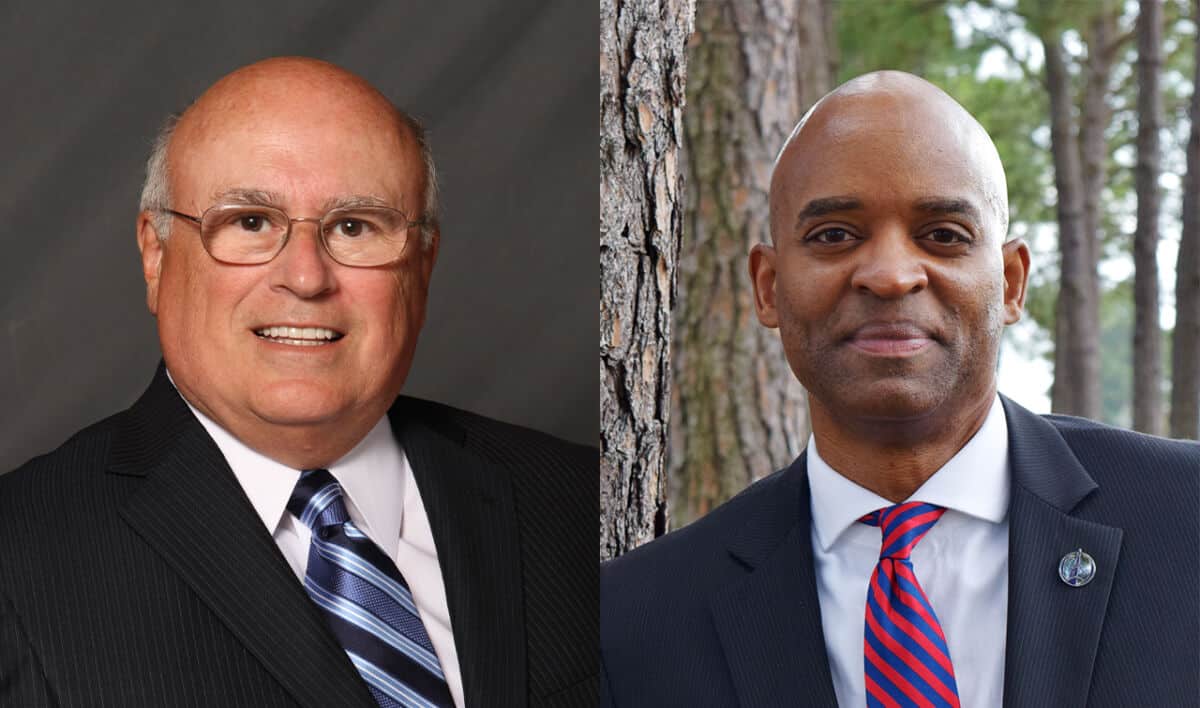 WASHINGTON, PA (July 24, 2020) – Washington & Jefferson College (W&J) is pleased to welcome Rev. Dr. Mark Louis Johnson Sr. ’94 as a new member, and Richard T. Clark '68 as a returning member to the W&J College Board of Trustees. Both appointments began on July 1, 2020, and both men will serve six-year terms.

Born in Anderson, Ind., Dr. Johnson is a licensed and ordained Baptist minister, making him the third generation in the Johnson family to hold this profession. He graduated from W&J as the first African American Senior Class Commencement speaker; he was also a stand-out basketball player, leading the team to a memorable run through the 1994 NCAA Division III Tournament in which the Presidents advanced to the Elite Eight for the only time in school history. W&J won three Presidents’ Athletic Conference championships with Johnson as a member of the squad, and he remains the 11th-leading scorer in W&J history (1,337 points). He was inducted into the W&J Athletic Hall of Fame in 2019.

Following a professional basketball career in Europe and South America, Dr. Johnson attended Princeton Theological Seminary in Princeton, N.J., where he earned the degrees of Master of Divinity and Master of Theology in Christian Education.

While attending Princeton, Dr. Johnson was named executive director of youth and young adult ministries at the 5,000-member Metropolitan Baptist Church in Newark, N.J. There he received the “100 Positive Men of New Jersey” award for his outstanding work with at-risk youth. Dr. Johnson expanded his career to the non-profit sector by accepting the position as the national best men program director for the “Best Friends Youth Foundation” in Washington, D.C. and spent time on Capitol Hill presenting character-based curriculum in United States School Districts.

In 2009, Dr. Johnson was elected the eighth pastor of the Liberty Hill Baptist Church in Cleveland, Ohio. His pastorate saw growth that impacted the church and the Cleveland community. Dr. Johnson created national partnerships with churches, businesses, organizations, and even Hollywood’s Paramount Pictures. During that time, he helped mobilize more than 1,000 missionaries from across the country, who came to Northeast Ohio each summer to beautify the city of Cleveland. His achievements attracted the attention of Baseball Chapel, an organization responsible for assigning chaplains to each Major League Baseball Team. In 2017, Dr. Johnson was named Chaplain to the Cleveland Indians and served alongside his wife providing support for the organization.

While serving the Cleveland community, Dr. Johnson completed a Doctorate from New Orleans Baptist Theological Seminary, New Orleans, La. His published project, “Racial Reconciliation in the Southern Baptist Convention,” focuses on repentance, reconciliation, and restoration. Dr. Johnson’s published work also includes his contribution to a “New Orleans’ Festschrift,” which is a collection of writings published in honor of a scholar.

In September of 2018, Dr. Johnson received the highest award offered at New Orleans Theological Seminary, The Drs. Charles and Rhonda Kelley Research Fellowship, to extend his doctoral research and serve as an adjunct faculty member in Leadership and Administration. He currently resides in New Orleans, La., and serves as pastor, professor, college lecturer, researcher, and Chaplain of the Miami Marlin’s AAA Baseball team in New Orleans.

Dr. Johnson served as the 2019 Baccalaureate speaker and was honored during the 220th Commencement Ceremony with an honorary Doctor of Divinity degree. He has been married to his college sweetheart, Heather Williams Johnson ’95, for 24 years and they have been blessed with four children: Mark Jr., Jonathan, Victoria, and Benjamin.

Clark, formerly the chairman, CEO and president of Merck & Co., has previously served as a member and chairman of the Board of Trustees. He also served as chairman of An Uncommon Bond: The Campaign for Washington & Jefferson College, which raised more than $115 million for current and future generations of W&J students by supporting scholarships and financial aid, improving learning spaces on campus, and strengthening the W&J fund. He also regularly hosts W&J alumni gatherings in the Philadelphia area, serves on alumni panels and is a career services volunteer. The Clark Family Library is named for Clark and his wife, Angela, who donated the leadership gift for the library's renovations. He was awarded an honorary Doctor of Humane Letters at W&J’s 2017 Commencement Ceremony, and received W&J’s Distinguished Service Award in 2018.

Clark earned his Masters of Business Administration from American University in 1970, and was a Lieutenant in the U.S. Army from 1970-72. He is the chairman of the Catholic Foundation of Greater Philadelphia, and serves on the Automatic Data Processing, Inc. Board of Directors, Corning Board of Directors, and is the chairman of the Cardiovascular Institute Leadership Council at Penn Medicine.

In 2015, Pope Francis named Clark and his wife Knight and Dame of the Order of Saint Gregory the Great for exceptional service to the World Meeting of Families, which is the highest honor the Holy father can bestow on an individual.

Washington & Jefferson College’s U. Grant Miller Library will receive a complete renovation thanks to a generous gift from W&J Board of Trustees Chair Richard...