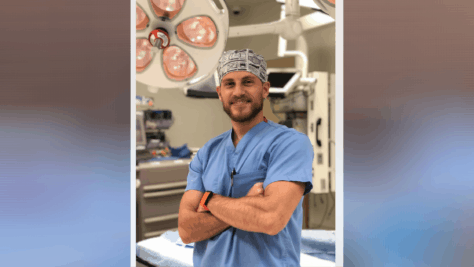 Kory Imbrescia ’12 was on his way to completing his fourth year as a general surgery resident at New Jersey-based Carepoint Health and its three regional hospitals in pursuit of his plan to become a plastic surgeon when the pandemic struck New Jersey with a vengeance.

When the hospitals canceled all elective surgeries to treat a sudden influx of COVID-19 patients, Imbrescia stepped up instead of backing down and took on what he considered the battle of a lifetime.

Imbrescia, a native of Monessen, Pa., joined 16 other surgical residents as part of a COVID Crisis Response Team working to save the lives of the most critically ill COVID patients in the intensive care units of the health system’s hospitals, which are located in Hoboken, Jersey City, and Bayonne. He and his peers worked 24-hour shifts, intubating patients, performing tracheostomies, inserting central venous catheters and chest tubes, and providing dialysis catheters for those suffering from kidney failure, along with other emergency treatment efforts.

“We had relinquished our roles as general surgeons since all elective cases were stopped early on,” says Imbrescia, a biochemistry major at W&J who completed his four years of medical school at the Lake Erie College of Osteopathic Medicine. “In comparison to sports, we became like utility players. We were just doing what was needed.”

Imbrescia admits that the challenges his team faced seemed insurmountable at times as an extensive network of health care workers, researchers, and community officials tried to “sift through information and data” to improve the treatment efforts of COVID patients.

“We were used to handling trauma as surgical residents, but this was something completely different,” Imbrescia says of the pandemic and its effect on the CarePoint hospitals and health care workers. “There were panic and uncertainty, and we didn’t have a lot of information in the beginning. The sheer volume was overwhelming. I never saw anything like that in my life. Initially, it was tough because we saw a lot of deaths, but our group specifically did a fantastic job coming together as a unit.”

Among the group’s biggest challenges: “We ran out of PPE [personal protective equipment] frequently,” he says. “So we had to use what was available and get creative. We were a resilient group.”

Imbrescia attributes his creative tenacity to his upbringing in Monessen, which continues to struggle to find its economic footing following the collapse of the steel industry, as well as his liberal arts education at W&J, which he says gave him a wide breadth of knowledge and experience.

“I always knew how to hustle and grind,” Imbrescia says of his drive to succeed even amidst a devastating pandemic and adversity. All of my life experiences had prepared me for this.”

India March '18 is practicing activism through her art.