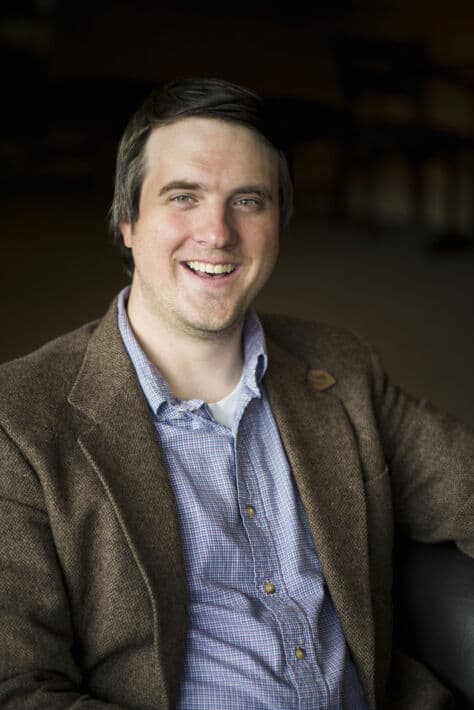 WASHINGTON, PA (Jan. 15, 2020) – W&J Associate Professor of Music Kyle Simpson, D.M.A. and his chamber orchestra will perform Simpson’s original film scores live to a screening of Georges Méliès’ two most famous silent films: A Trip to the Moon (1902) and The Kingdom of Fairies (1903).

The performance is Saturday, Jan. 25 at Andrew Carnegie Free Library & Music Hall in Carnegie, Pa., and is the first show of the 2020 Listen Locally season. Simpson will perform with an 18-piece chamber orchestra that includes Pittsburgh’s Red Line String Quartet and also features W&J Professor of Music Dr. Mark Swift, Ph.D. on piano, as well as Instructor Bert Lerini on drumset.

Méliès’ early twentieth century costumes, sets, and signature optical tricks are crafted together with Simpson’s eclectic compositional style with influences of Debussy, Stravinsky, Steve Reich and a nod to the cinematic sounds of John Williams and Alexandre Desplat. Travel through time with us and rediscover these brilliant films with the uniquely 21st century concept of marrying contemporary music with classic film.

Kyle Simpson D.M.A is a Pittsburgh-based composer and trumpet player who seeks to fuse the worlds of jazz and contemporary classical music. He is an associate professor of music at Washington & Jefferson College. Simpson has performed professionally with the Glenn Miller Orchestra (2007 tour). He has also shared the stage with jazz artists such as Lew Soloff and Paquito D’Rivera. Aside from his jazz explorations, Simpson has written numerous works for the concert stage, including works both large and small. In 2011, he conducted his own composition Journey Into Wissameking with the Janaček Philharmonic, in Ostrava, Czech Republic at “Ostrava Days.”  Other works have been performed in festivals in Italy, Croatia, France, Greece, and the United States.

His recent composition, On The Road Suite, was awarded Honorable Mention for the 2017 American Prize in Orchestral Composition. Simpson has also made forays in the film industry by scoring music for Pittsburgh directors, including Tom Kurlander and Pittsburgh Filmmakers John Cantine. He is currently working with filmmaker Bruce Spiegel in scoring a new documentary about the steel industry in Pittsburgh. He recently won acclaim for his scoring work in Thessaloniki, Greece at the Fusion Film Scoring Workshop.

Washington & Jefferson College (W&J) will graduate nearly 300 Presidents during its commencement ceremony May 20, 2017.

Washington & Jefferson College is proud to announce the addition of 19 academic programs.