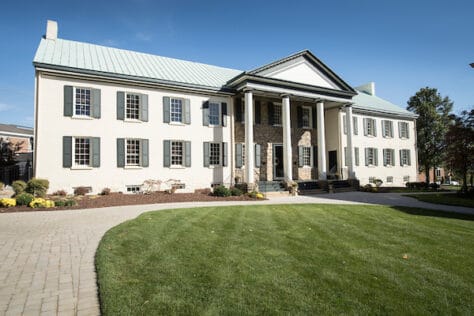 WASHINGTON, PA (Oct. 25, 2021) – It’s only natural to wonder about local ghost stories – especially on a campus with as much history as Washington & Jefferson College. As W&J celebrates Halloweek this week, we’re looking back at the tales that have been told about some of our most historic buildings.

Of course, these tales begin with McMillan Hall, the oldest building on campus, which dates to 1793 and is named in honor of college founder John McMillan. Since its construction, the building has been used for dormitories, classrooms, and administrative offices. The local newspaper, the Observer-Reporter – as well as W&J’s own sources – recount that those who have been in the building, especially late at night, claim that a ghost named Abigail roams the halls. Abigail is reported to move items in unoccupied offices, and to open and close doors.

McMillan’s age makes it a likely candidate for tales of hauntings, but it’s not the only building with a story. James Longo, Ed.D., Professor Emeritus at W&J, compiled three collections of ghost stories throughout his academic career and some of those were inspired by his time at W&J. In his book “Favorite Haunts: Haunted Odyssey III” – available at the Clark Family Library – Longo recalls a story about student experiences in Mellon Hall.

In the early 1980s, two young men were reading in a study room, when a tall, strange man walked past the room into the nearby lounge. One student got up to follow the man, but rather than finding him, the student found his portrait hanging over the fireplace mantle. The portrait was of John McMillan, one of W&J’s founders, who was known to keep a watchful eye on his students.

In addition to Longo’s story, the Spring 2015 W&J Alumni Magazine recapped some campus lore as well.

The former Thistle Physics Building, built in 1912 and torn down in 2018, had its own strange occurrences, specifically in Room 13. It was reported that the door to Room 13 would sometimes swing shut, occasionally breaking the door’s glass. This prompted Raymond Bell, chair of the physics department from 1937 to 1975, to change the door’s number 13 to the Roman numeral XIII. After this change, it is reported that the door’s glass never broke.

At a college with almost 250 years of history, a few tales are bound to exist. Are these tales true? We’ll leave that up to you and your own experiences.

For the second year in a row, a W&J student has won a scholarship from the German American Business Circle of Pittsburgh.

Energy Lecture Series to Take a Look at Nuclear