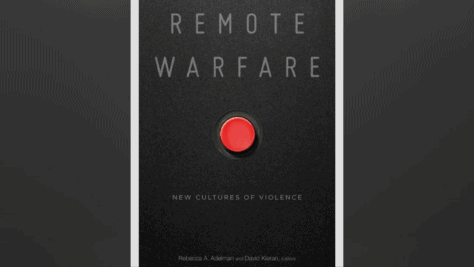 Dr. Kieran is a co-editor on the volume along with Professor of Media and Communication Studies at the University of Maryland Baltimore County, Rebecca A. Adelman, Ph.D. Over the course of 13 essays, Remote Warfare examines the effects of remote technology on the culture of war.

“I have been teaching a course called ‘9/11 and the War on Terror’ for years, and we always spend a class talking about the implications of the rise of drone warfare, and Rebecca and I have been friends and collaborators throughout our careers. Over the years, we had several conversations about how we were frustrated by what we perceived as a fairly limited conversation that scholars were having about this topic. The scholarship seemed limited to questions of ethics and efficacy, rather than the broader range of questions that we could imagine people asking about what it meant to kill – or be killed – from a distance,” Dr. Kieran said.  “We thought that it was important to look beyond drone warfare specifically, and to take a broader historical and theoretical view of what ‘remote warfare’ means, and how individuals and groups have experienced it and thought about it and its implications.”

The pair decided to put together a special issue of the Journal of War and Culture Studies, and received so many responses to a call for submissions from people thinking about this issue in new and exciting ways that they decided to do a book as well.

The result is a timely and provocative collection of essays that addresses concerns on how we wage war in contemporary times. With authors from four continents, scholarly fields ranging from literary studies to communications to history and eclectic backgrounds including a member of the U.S. military who serves as a “remote warrior” and ethnographers who have been on the ground in communities in Pakistan and Lebanon impacted by remote warfare, the book brings together a varied range of perspectives that represents multiple sides of this nuanced conversation.

The volume is a bit different from Dr. Kieran’s previous solo outings Signature Wounds: The Untold Story of the Military’s Metal Health Crisis (2019) and Forever Vietnam: How a Divisive War Changed American Public Memory (2014). He and co-editor Dr. Adelman were challenged in finding a set of essays that work cohesively together while still bringing a fresh perspective on the topic.

“I had a wonderful co-editor who shares a lot of my interests and perspectives but also approaches issues somewhat differently than I do, and we had fantastic contributors who worked with us and each other to produce really wonderful essays that are innovative in their own right and also speak to each other. In the end, the credit goes to the authors who produced such provocative essays,” Dr. Kieran said.

Remote Warfare: New Cultures on Violence is now available through the University of Minnesota Press.

During the 2018 Tournament of Roses, Washington & Jefferson College celebrated its historic 1922 appearance and the induction of Dr. Charles “Pruner” West ’24 into...

W&J Women in STEM: Getting to know Dr. Kelly Weixel

We asked Dr. Weixel about her work in biology and her path to W&J. Check out what she had to say!