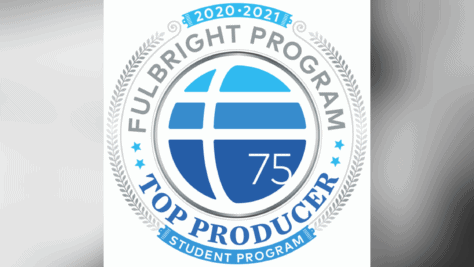 WASHINGTON, PA (Feb. 26, 2021) – Washington & Jefferson College (W&J) is proud to be included once again on the list of U.S. colleges and universities that produced the most 2020-2021 Fulbright U.S. Students. Each year the U.S. Department of State’s Bureau of Educational and Cultural Affairs (ECA) announces the top producing institutions for the Fulbright Program, the U.S. government’s flagship international educational exchange program. The Chronicle of Higher Education publishes the lists annually.

Four students from W&J received Fulbright awards for academic year 2020-2021: Andrew Donatelli (Germany); Alexandra Scalise (Germany); Jared Kelly (Spain); and Monica Park (Ukraine). Victoria Metz was chosen as an alternate for the program in Ecuador. All students have been selected for teaching assistantships in the respective partner countries. Read more about their awards here.

“This list is based on hard numbers rather than proportions of students, so it is a big accomplishment for us, bigger than it would otherwise be, because W&J is smaller than many of the other schools on the list,” said Susan Vdovichenko, Fulbright Program Advisor, who administers the Fulbright competition for W&J through the Office of Academic Affairs.

“This distinction speaks to the high quality of academics and the breadth of opportunity, both on and off campus, that students receive when they attend W&J,” said Jeffrey Frick, Ph.D., Vice President for Academic Affairs and Dean of the College. “We are incredibly proud of the Fulbright scholars among our students and our faculty.”

“We are delighted to see that the colleges and universities we are honoring as 2020-2021 Fulbright Top Producing Institutions reflect the geographic and institutional diversity of higher education in the United States,” said Mary Kirk, Director of the Office of Academic Exchange Programs in the U.S. Department of State’s Bureau of Educational and Cultural Affairs. “In supporting their faculty advisors and administrators who guide their students through the Fulbright application process, these institutions benefit from having their students represent their campus overseas, often inspiring reciprocal exchanges from foreign Fulbrighters. Fulbright U.S. Students enrich their educations, advance their careers, and make valuable contributions abroad and at home. They also expand their networks by joining the diverse and accomplished group of Fulbright alumni and receiving the professional recognition that comes with being named a Fulbright Student.”

The Fulbright Program was created to increase mutual understanding between the people of the United States and the people of other countries. Fulbright is the world’s largest and most diverse international educational exchange program. The primary source of funding for the Fulbright Program is an annual appropriation made by the U.S. Congress to the U.S. Department of State’s Bureau of Educational and Cultural Affairs.

2021 marks the 75th Anniversary of the Fulbright Program. Celebrations throughout the year will highlight the impressive accomplishments and legacy of the program and its alumni over its first 75 years, both in the United States and around the world. A dedicated 75th anniversary website (www.fulbright75.org) will be updated throughout 2021 to showcase Fulbright alumni, partner countries, and anniversary events.

Since its inception in 1946, over 400,000 people from all backgrounds—recent university graduates, teachers, scientists and researchers, artists, and more—have participated in the Fulbright Program and returned with an expanded worldview, a deep appreciation for their host country and its people, and a new network of colleagues and friends. Fulbright alumni have become heads of state, judges, ambassadors, cabinet ministers, CEOs, and university presidents, as well as leading journalists, artists, scientists, and teachers. They include 60 Nobel Laureates, 88 Pulitzer Prize winners, 75 MacArthur Fellows, and thousands of leaders across the private, public and non-profit sectors.

WASHINGTON, PA (June 30, 2022)—Each session, the Office of Academic Affairs compiles a list of full-time students whose grade point averages for the previous session...

WASHINGTON, PA (Dec. 4, 2019)—In the case of who wrote an entire novel in their second language over the course of a semester, the culprits…

WASHINGTON, PA (May 26, 2020)—Clara Sherwood ’22 is ready to take on the world. The International Studies and Spanish major came to Washington & Jefferson…