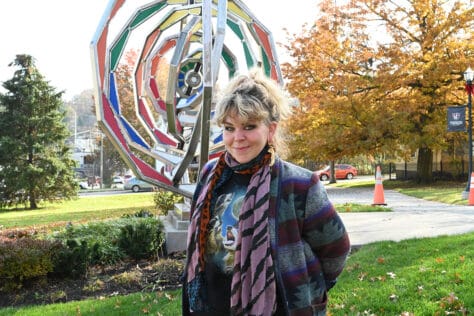 WASHINGTON, PA (November 17, 2021) – A year after the release of their book, “Reframing Sex: Unlearning the Gender Binary with Trans Masculine YouTube Vloggers,” Stevie Berberick, Ph.D. had the opportunity to discuss it as the keynote speaker at Texas Tech’s annual Gender & Sexual Identities Colloquium.

The assistant professor of communications arts at Washington & Jefferson College says they never conformed to society’s gender norms, but instead developed a lifelong interest in gender and women’s studies. Their book examines the portrayal of these topics in the media.

For the keynote, Berberick presented analyses of popular streaming shows with transgender characters, such as The Chilling Adventures of Sabrina. Alongside mainstream media, the book also explores do-it-yourself video blogs created by transgender content producers on YouTube.

“As a media scholar, my primary concern is: what does the media teach us about ourselves, about others, and about the world around us,” Berberick said. “For many people, media productions are their first exposure to people who may be different from them. For example, people who are straight might be first exposed to gay people through the media.”

Berberick notes that the media often hyperfeminizes transgender women, portraying them in heels, dresses, and heavy makeup. Conversely, transgender men are nearly invisible in mainstream media. The act of hyperfeminization and simultaneous invisibility of trans masculinities reinforces society’s gender binary of opposing poles of masculine and feminine ideals with little room in the middle or at edges.

“The gender binary leaves no room for people who either don’t express themselves as completely masculine or completely feminine,” they said. “Some people might have a variety of masculine and feminine expressions, meaning it is vital that we understand gender as a continuum rather than a static point. The binary is dangerous because it tells men that they can’t express their emotions, and it tells women that they have to adhere to a very strict body image, and these are just two examples.”

Berberick recognizes that gender can be a very divisive topic, but they believe one of the reasons for that is the confusion between gender and biological sex. Berberick said the two are certainly connected, but they are not interchangeable.

“Biological sex is our physical body,” Berberick said. “Biological sex is more binary than our understandings of gender, but oftentimes people don’t consider intersex variations and just place sex as female or male – so it isn’t quite as binary as many think. Gender is the way we live and express ourselves in our body, with choosing whether we want to present ourselves as masculine, feminine, or a mix of both.”

After giving the keynote address at Texas Tech, Berberick was asked by W&J’s Student Activities Board (SAB) to be the keynote speaker for the organization’s event, “Sex: The Seminar” on February 5, 2022. More information about the event will be released when available. Readers interested in purchasing Berberick’s book can find it through most major booksellers.

June is Pride month, and at Washington & Jefferson College (W&J) we’re proud to support our students from all backgrounds. Both the College and community...