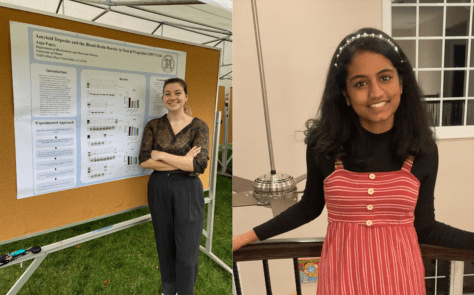 Over the summer of 2021, senior Anja Popey, and juniors Lekhya Kollu and Nathan Millison, interned at universities throughout the United States and studied, tested, and investigated a diversity of scientific phenomena important in terms of medical advancement and discovery. Learn more about their experiences below.

University of Miami, Department of Biochemistry and Molecular Biology

Popey, an economics major and chemistry minor funded by a Maxwell Scholarship, studied Alzheimer’s Disease as a comorbidity (disease or medical condition simultaneously present with another disease or medical condition in a patient) with HIV, and examined how specific proteins, such as amyloid beta, contributed to the advancement of disease. Assisting lab leaders primarily through the transfer, growth, treatment, and analysis of a variety of cells, the scientists involved with the lab reaffirmed the that the accumulation of amyloid beta over time leads to neural degeneration and eventually Alzheimer’s.

Popey partially attributes her success in the lab to Professor of Biology Dr. Candy DeBerry, who assisted Popey in preparing her application materials, and both DeBerry and Professor of Chemistry Dr. Michael Leonard for her preparedness in the lab, which she claims has brought her invaluable insight.

“This experience taught me that I have so much more to learn,” Popey said, “but that I am capable of handling anything.”

University of Maine, Department of Molecular and Biomedical Sciences

Kollu’s work, funded by a Magellan Franklin scholarship, focused on the bacterial-fungal interactions during co-infections and looked specifically at the simultaneous presence of the fungus C. albicans (a pathogenic yeast commonly found in the gastrointestinal tract) and the bacteria P. aeruginosa (a pathogen commonly spread in hospital settings) during treatment with fluconazole, an antifungal agent commonly used against Candida (yeast) infections. Using in vitro experiments and a zebrafish model, Kollu paired known calcineurin inhibitors (immunosuppressants) with P. aeruginosa to observe their interactions, and determine how the presence of P. aeruginosa enhances the fungicidal (fungus-killing) activity of fluconazole against C. albicans.

“A lot of the techniques I had to use in the lab were things I had already gotten some experience with in my lab courses at W&J, which made my training a lot easier,” the biology major said, noting that she’s grateful to Associate Professor of Biology Dr. Anupama Shanmuganathan and Professor of Biology Dr. Candy DeBerry for providing continuing support and education.

“I had to deal with a lot of failure last summer—a lot of the experiments I did just didn’t go how I wanted or expected them to—but it made me really good at looking at things critically,” she said. “Dr. Shanmuganathan and Dr. DeBerry really encouraged me…and I’m going back to the same lab for the summer of 2022.”

Millison, a biochemistry and philosophy double major funded by a Magellan Franklin scholarship, dedicated his summer to the RNA profiling of glucagon (a hormone that controls glucose levels in blood) to better understand its role as a transport mechanism for glucose (blood sugar) and the relationship it has with proteins involved in the transportation process.

The research, co-authored by Millison and published as, “Profiling of RNA-binding Proteins Interacting with Glucagon and Adipokinetic Hormone mRNAs” in, “The Journal of Lipid and Atherosclerosis,” showed that certain proteins, such as HSP70, chaperone glucagon in the transportation process and aid the hormone in its transport of glucose, rather than inhibit or activate glucagon as a transport mechanism.

“I learned a ton just by being in that environment,” Millison said, crediting Professor of Biology Dr. Candy DeBerry for enabling his success. “She was just incredibly helpful getting me somewhere outside of the norms where I got to explore a little bit and find something that I wanted to do.”

WASHINGTON, PA (May 26, 2020)—Clara Sherwood ’22 is ready to take on the world. The International Studies and Spanish major came to Washington & Jefferson…

WASHINGTON, PA (January 21, 2022) – Clara Sherwood ’22 is founding her professional future one country at a time. Sherwood – a triple major in…