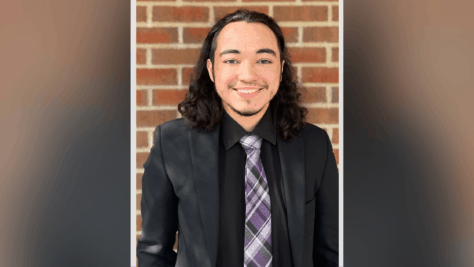 W&J Senior, Future Teacher Lives Up to His Alma Maters’ Missions of Leadership

WASHINGTON, PA (April 30, 2021) – Kenneth Jimenez ’21 has enjoyed his time as a student at Washington & Jefferson College, but after he graduates in May this educator-at-heart will be the one mentoring the next generation.

Kenny, a history major and education minor, will return to his hometown of Houston, Texas to teach eighth grade social studies in the YES Prep public school system, which is his alma mater.

YES Prep is an open-enrollment public charter school system serving grade-school students in Houston’s most underserved communities. Kenny sees a strong tie between YES Prep’s focus on leadership and W&J’s mission to foster leaders of uncommon integrity. When he spoke to prospective students at W&J Take Action Day in April, he shared that W&J prepares students not only to be ready for their careers, but also to lead in whatever field they choose.

“Don’t be scared to take advantage of opportunities here,” Kenny said. “A lot of times when I would do a project I was nervous because it would be something that I was passionate about but that maybe was not well known to my classmates. But both professors and students will encourage you and will make it comfortable for you to present.”

Kenny has taken advantage of many opportunities during his time at W&J. As a freshman in Dr. Michael Shaughnessy’s German Film course, Kenny and his classmates traveled to Germany and Poland for an immersive World War II education. He also took part in a JayTerm course, Engaging the Sonoran Border, in which Dr. Jason Kilgore took students to Arizona to engage with law enforcement officers, humanitarians, indigenous peoples, and those who experience border life every day.

As President of the Latinx Culture Association Club for the past two years, Kenny helped bring programming to campus that focused on issues most people in Southwestern PA aren’t directly connected to, like the border crisis.

“We held a lot of panels and open discussions where students can engage in a dialogue about it,” he said. “Hopefully we’ll continue to host events and have people be comfortable talking about controversial issues.”

Kenny said he even viewed the pandemic as an opportunity to help his career as an educator. Working through Zoom, Teams, and Google Classroom helped him prepare for the possibility of beginning his teaching career in a remote or hybrid learning environment.

“Teachers still really don’t know yet how they will have to teach in the fall,” he said. “It was a great way to practice presenting not only to my peers, but eventually to my future students.”

Robert Gould comes to W&J with more than 23 years of experience in higher education leadership.