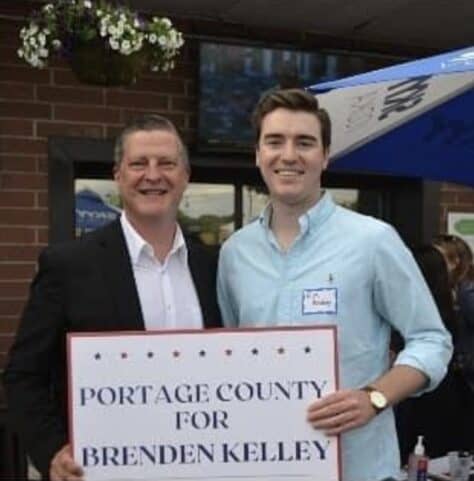 WASHINGTON, PA (March 8, 2022)—W&J Senior Nick Belofsky may swim for W&J, but as an intern with the Brenden Kelley Congressional Campaign he’s become an expert at running.

A triple major in political science, international studies, and Spanish, he was hired as the deputy campaign director for Kelley’s campaign last February, and one year later, he’s still aiding the lawyer in his race to represent Ohio’s 14th Congressional District.

Assigned with a range of tasks, including securing endorsements, organizing volunteer work, attending meetings, planning events, and even managing Kelley’s calendar, Belofsky has done a bit of everything in his role.

“One thing I’ve come to realize is, it’s totally different having a 20-page research paper due versus having a list of 2,000 lawyers in the district that I have to find contact information for,” Belofsky said. “But I think my time at W&J has prepared me really well because, even though there is a difference in the work, I feel like the ethic that our curriculum creates, transfers really well.”

Having added the internship to his pursuit of three majors and a full swim schedule, it’s an ethic on which Belofsky has come to depend.

“It’s been a lot,” he said of the workload, noting that he’s taken a step back from his former role as president of the Student Athletic Advisory Committee, “but I wouldn’t change one thing about it.”

That’s what political science professors Joseph DiSarro, Ph.D. and Buba Misawa, Ph.D. were betting on when they recommended Belofsky for the job last year, after Kelley ‘12, an alumnus, told them he needed assistance kickstarting his campaign. Though Belofsky suspects his experience as a national fellow and director in Southwest Pennsylvania for Joe Biden’s 2020 presidential campaign likely secured him the role, he said DiSarro and Misawa have been instrumental in his success.

“Honestly, I haven’t had a bad experience with any professor…,” he said. “However, the two that have been the most impactful bar none are Dr. Misawa and Dr. Disarro. I’ve spent a lot of time with them outside of the classroom, just having conversations with them outside of the Commons or at political events, and I feel like that’s been really valuable.”

Belofsky added that the Maxwell Scholarship (received for his internship) has also been a great help, and he hopes the opportunity it helped to provide will buttress his applications to law schools.

“I applied to nine schools, but, so far, I’ve heard back from three of them,” Belofsky said. “I’ve gotten into all three, so now I’m just waiting to hear back from the other six…. Then it’s just looking to see what’s the best path for me.”

Nicholas Baker ’18 brought a blood-pumping experience to his summer vacation.

Junior spends summer researching with Department of Pathology at Pitt

WASHINGTON, PA (Sept. 1, 2020)—While coronavirus is top-of-mind for the public and in the medical world right now, W&J junior Sam Dauby spent his summer…