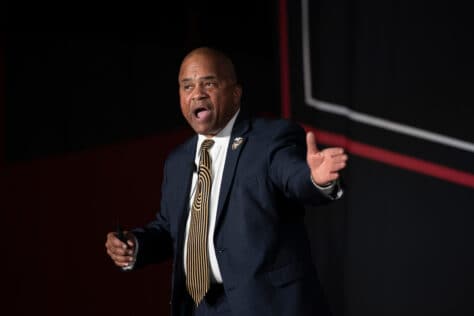 WASHINGTON, PA (February 24, 2022)—In the United States, it can be difficult to acknowledge that America’s democratic republic has often failed to protect some groups of citizens. During February’s Symposium on Democracy at Washington & Jefferson College, that’s just what historian Fred. L. Johnson III, Ph.D. did.

In his keynote address, “Tolerating the Enemy Within: The Normalization of Mob Violence,” Johnson discussed examples of democratic failure throughout American history, focusing on the normalization of vigilante mob violence through actions like lynching, in the nineteenth and twentieth centuries which were never meaningfully addressed by Congress.

“It’s our responsibility to call out legislators when they’ve failed,” he said about leaders who are supposed to protect and strengthen America’s democratic institutions by protecting and meeting the needs of all citizens.

“In one mob action after another, those responsible for maintaining civil order did nothing to stop the chaos,” Johnson said, adding that as Black businesses, homes, neighborhoods, and community members were being attacked, civil servants not only refused to act but often encouraged or participated in the atrocities they were tasked with preventing or ending.

“What is it called to live in a democracy and not be able to depend upon the institutions of democracy and civil society to protect you—to meet your basic needs?” Johnson said, questioning the reality of democracy truly existing for minorities during some of the nation’s darkest moments. “In a democracy when we depend on a rule of law…if it’s not being done, is it a fully functioning democracy?”

Citing proslavery features like the three-fifths compromise of the 1787 U.S. Constitution, oppressive post-Civil War Jim Crow legislation like vagrancy laws which enabled the widespread use of convict labor, and the Supreme Court’s 1896 ruling in Plessy v. Ferguson which established the doctrine of “separate but equal,” Johnson argued that tolerance for these breaches of democracy and associated acts of violence has created a culture of impunity, extending into contemporary life.

“On January 6, 2021, the Confederate flag finally made its way into the U.S. Capitol as the result of a mob action,” Johnson said. “The mob of insurrectionists on January 6 was not an aberration but the latest in a history of such occurrences,” which he described as “the consequences of no consequences.”

“History . . . gives us the facts today so that we can be better tomorrow,” Johnson said, calling the audience to action. “Are we going to be the democratic republic that the rest of the world looks to?”

Washington & Jefferson College’s annual Symposium on Democracy is a full-day event where regular classes are replaced by a dozen educational sessions on wide-ranging topics related to democracy and democratic institutions in the United States and abroad. A recap of 2022 Symposium events can be found on the Symposium on Democracy website.