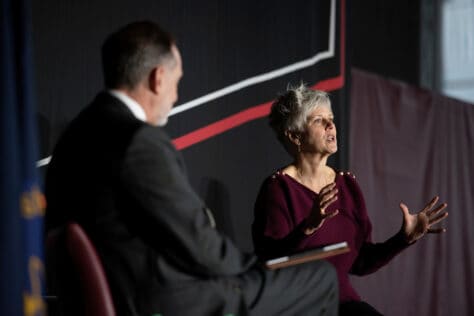 WASHINGTON, PA (February 24, 2022)—When Shaqaiq Birashk, a former policy advisor on a USAID/DAI funded project with the Afghan government, had to leave Afghanistan suddenly in 2021 after the United States withdrew from in Kabul, she had to ask herself what went wrong with America’s 20-year effort to establish a democratic Afghan republic.

She discussed her experiences during Washington & Jefferson College’s fifth annual Symposium on Democracy, held on campus Feb. 23, in a joint keynote session with U.S. Department of State official Kerry McBride ’89 who helped in reopening the U.S. Embassy in Afghanistan in early 2002. Their keynote discussion, moderated by W&J President John C. Knapp, was entitled “The Fall of Democracy in Afghanistan: First-Hand Perspectives,” and reflected on the current situation and reasons for the failure of democracy in that country.

They found easy consensus on several possibilities, one being an unclear purpose for a continued U.S. presence. McBride noted that the U.S.’s mission was originally intended to stop future terrorism in the U.S., and that in that sense, it was successful, as the United States has not been attacked in 20 years.

In the two decades the U.S. spent in Afghanistan, the mission shifted and leaders in both countries aimed to establish a democracy. However, that mission became confused due to a lack of transparency, the installation of corrupt leadership, and unfulfilled promises.

“We just became more and more isolated,” McBride said, noting that in their final years there, American forces focused on security and turned inward.

“We only listened to the elite. We didn’t listen to ordinary people,” Birashk added.

“They probably thought, ‘We don’t have time for democracy right now. We just have to get some dinner,’” she said.

“They had lost faith in democracy because the services promised to them by the government, by the international community, were not being delivered,” she said, noting that the Taliban used that to their advantage.

Though that undermined the endurance of the Afghan democracy, Birashk said its failure resulted more from a lack of transparency and open communication between the U.S. and Afghan leaders, and even amongst U.S. leaders themselves, referring to the manipulation of information by high-ranking U.S. officials revealed by the Afghanistan Papers published by the Washington Post in 2019.

“We didn’t listen to the Afghans in 2001,” she said. “And Afghans paid for that with their blood.”

McBride shared that sentiment, emphasizing that perhaps more regard for Afghan thoughts, culture, and history, could have led to greater success in creating a democracy.

“When we go into a country to help them, we need to make sure that we’re helping in a way that works for them,” she said. “Maybe one size doesn’t fit all.”

Despite its failure, both women argued that this is not the end of democracy in Afghanistan.

Birashk reminded the audience that U.S. democracy wasn’t built over night and therefore it is unfair to have expected Afghans to build theirs in just 20 years, noting that while the situation in Afghanistan is bleak at the moment, the people there and their desire for democracy should not be ignored. “Afghans just needed time,” Birashk added.

Washington & Jefferson College’s annual Symposium on Democracy is a full-day event where regular classes are replaced by a dozen educational sessions on wide-ranging topics related to democracy and democratic institutions in the United States and abroad. A recap of 2022 Symposium events can be found on the Symposium on Democracy website.

WASHINGTON, PA (May 11, 2022)—W&J senior Preston Evans is SMART. At least according to the United States Department of Defense (DoD).