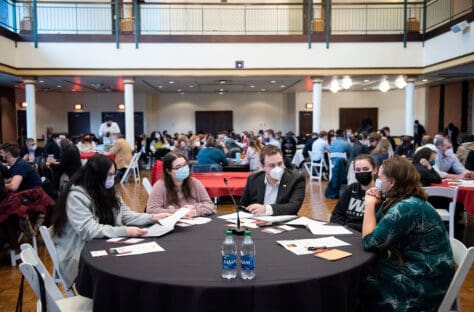 WASHINGTON, PA (February 24, 2022)—The 2022 Symposium on Democracy at Washington & Jefferson College could not have been more timely, said Nicole Bibbins Sedaca, adding that democracy currently finds itself “battered around the world.”

Bibbins  Sedaca—the Executive Vice President of Freedom House, the leading organization researching the state of freedom and democracy in the world—closed this year’s Symposium on Democracy by leading a working session on “Global Threats to Democracy,” which involved students in an interactive exploration of the situation in Ukraine.

Guided by Bibbins Sedaca, students took action, albeit in the security of Rossin Campus Center, by role-playing as officials from the United Nations. They worked with provided information to consider how they would advise the UN to address the situation in the Ukraine. Unknown to those in the room, the Russian invasion of Ukraine would happen just hours later.

In her introductory talk, Bibbins Sedaca shared her insights into why democracy matters as well as the global impact when democracies fail. Bibbins Sedaca noted that over the last 15 years, Freedom House has reported a decline in freedom around the world, as shown by the organization’s annual report, Freedom in the World, which was released in late February. More people than not live under repressive regimes, Bibbins Sedaca said, and more countries have a state of democratic development that is getting worse rather than better. The effects of that are felt around the world.

She acknowledged that while democracy is not perfect, it includes self-correcting mechanisms such as elections and legislative processes that create space for debate and peaceful resolution of conflicting ideas.

“Inherent in democracies are the very foundations that allow the citizens of a country to change those things which are not living up to democratic aspirations,” she said. “We have elections. We have legislators who are making laws who we can vote in and out of office. We have free media who can put pressure on public officials to make changes and policies. That allows our system to change, grow, and better serve and represent the interests of the people.”

While citizens of democratic governments can constantly work to improve the system and correct shortcomings, any democracy is at risk if its citizens don’t have a willingness to do that, she said. Fortunately, there is much that can be done.

And of course, students can get involved as they did during the Symposium on Democracy and use experiences like the Model UN exercise to better understand the state of democracy in the world, and what puts it at risk.

“With threats to democracy stronger than ever, it is more important than ever for us to take action, understanding how and why democracy thrives and why it fails,” Bibbins Sedaca said.

A follow-up session the following week featured expert members of the W&J faculty analyzing the continuing attempt by Russia to gain troll of Ukraine through military action.

Washington & Jefferson College’s annual Symposium on Democracy is a full-day event where regular classes are replaced by a dozen educational sessions on wide-ranging topics related to democracy and democratic institutions in the United States and abroad. The 2022 theme was “Why Democracies Fail.” A recap of 2022 Symposium events can be found on the Symposium on Democracy website.

Gottschall is the author of The Storytelling Animal: How Stories Make Us Human.

Tom Talks, a discussion series presented by the Washington Fellows scholars of W&J, is Dec. 2 at 7 p.m. in Rossin Campus Center.