Wrestling & Rising: Sonnieboy Blanco '17 prepared to make his mark on the world

Sonnieboy Blanco ’17 doesn’t have the background one might expect from the winningest wrestler in W&J history.

He was born in a country where wrestling isn’t a popular sport. He didn’t care for wrestling when he first tried it. He almost didn’t come to W&J at all. But a series of encounters with the sport, and with the coaches at W&J, led him to the success he found at the College.

“Being at W&J helped me grow as a person and allowed for me to understand the importance of education. W&J will always have a special place in my heart,” Blanco said.

The talented athlete was born in Liberia and spent his early childhood there before moving to New Jersey with his family in 2002. He doesn’t remember much about living in western Africa, but has a fondness for his mother’s stories of the country.

Adjusting to life in the United States and the American school system was made easier by dedicated teachers, and by the other kids at his school, who were incredibly welcoming to him.

“School was kind of hard for me because I honestly never liked to study,” he said. “But my mom always told me it was important, so I just did it. I had friends that helped me. I was also in ESL (English as a Second Language), and that helped me tremendously.”

Blanco discovered wrestling at a young age, but it wasn’t exactly the sport he thought it was.

“At first, I thought it was WWE (World Wrestling Entertainment) wrestling because I used to watch it all the time. I thought I would like that, you know, throwing chairs and jumping off the top rope,” he said. “I later found out what wrestling actually was, and I was a little disappointed, but I decided to give it a try.”

His athletic career had a less than stellar start. He started wrestling in fifth grade, but quit because he lost all of his matches and wasn’t having fun. Blanco tried basketball briefly, yet soon realized that wrestling was his sport and decided to give it another chance. He came back to wrestling in seventh grade and fell in love with it. During his sophomore year, his coaches told him that he had a chance of wrestling in college so Blanco committed to working harder at the sport.

Blanco went 5-1 against his opponents to earn third place at the 2017 NCAA Division III Championships.

When it came time for Blanco to decide on a college, W&J was not on the top of his list.

“To be honest, W&J was my last choice of schools. I remember telling my friends how some coach from this college in Washington, Pa., called me and was telling me about wrestling at his college. I didn’t want to go initially because it was so far away from home,” he said.

A visit to the campus quickly changed his mind. He said it felt like home, and he just had a gut feeling that W&J was where he wanted to be.

“Sonnieboy is an extremely talented wrestler, but what truly made him special was his work ethic,” said Prairie. “Sonnieboy gave everything he had each practice and really set the bar high for those around him. He found a way to improve himself every year.”

Blanco grew up with an appreciation for hard work.

“I believe in working hard for whatever you want in life,” he said. “My motivation comes from my mother. I don’t know anyone who works harder than her. I want to make her proud.”

Sonnieboy’s record at W&J continued to improve until, in his senior season, he became W&J’s all-time leader in career wins, triumphing in 124 matches, and took home the most single season victories with 42 wins. He finished third in the nation at the 2017 NCAA Division III Championships, repeating as an All-American after finishing fifth last season.

It would be easy to let success go to his head, but Blanco stays humble.

“It was awesome. I still don’t know how I feel about everything. I never thought I would be a two-time All-American in college. I’m just blessed to be able to do it,” he said. 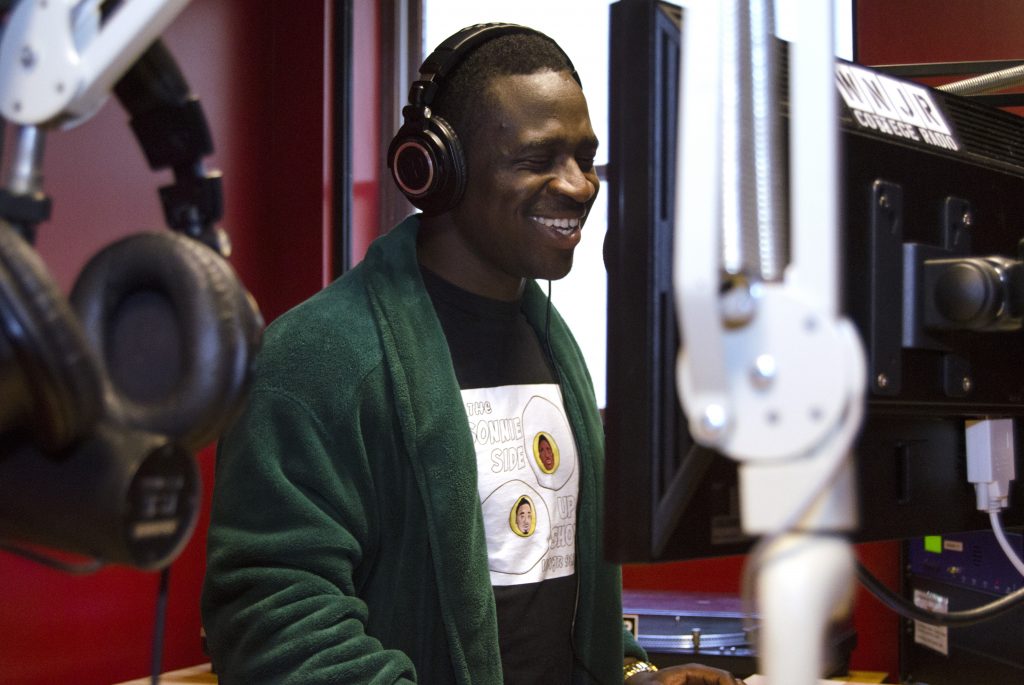 Blanco started hosting his radio show “Sonnie Side Up” on 91.7 WNJR during his junior year. He was known for wearing a bathrobe while hosting the show.

As a communication arts major with an emphasis in public relations, Blanco hosted his own radio show on 91.7 WNJR called “Sonnie Side Up.” He grew to love the broadcast, and appreciated the support he gained from campus listeners. He also served as a class representative in the Student Government Association and was involved with the Young Entrepreneurs club.

Blanco feels like he would not have gotten as far as he has without the help and support of Coach Prairie and Coach Jeff Breese.

“I’m blessed for all of the opportunities I have been able to experience,” he said. “I still can’t believe everything that has happened for me, but I am enjoying every minute of it.”

After graduation, Blanco hopes to work in marketing and plans to devote time to volunteering with children.

A Toast to Tastemakers: Presidents deliver diverse beverage experiences to patrons across the nation

W&J alumni around the country are taking part in the rise of craft breweries, wineries, and distilleries over the last few decades. Some Presidents have spent their careers in the industry, while others are just starting out. They are committed to using their knowledge, whether it be scientific or entrepreneurial, to create quality products and give back to their communities – and they have a good time doing it. Yianni Barakos ’08 converted a 100-year-old…

A Toast to Tastemakers: Yianni Barakos

When Yianni Barakos ’08 graduated from W&J with a degree in business administration, he envisioned a long and successful career for himself in construction project management, after which he would start a distillery as a working retirement project. But life had other plans. A car crash sidelined Barakos in 2012, leaving him in a state of recovery for the better part of two years. Unable to continue with his career plans due to physical limitations,…

A Toast to Tastemakers: Ed Belfoure '67

When Ed Belfoure ’67 retired as a chemistry instructor at the Naval Academy, he and his wife planned to spend their time traveling. But after visits with their children out-of-state and a lengthy vacation abroad, Belfoure realized he needed something else to fill his days. With his wife’s support, he started a distillery in downtown Washington, Pennsylvania. Red Pump Spirits is named for the red pump from his grandparents’ home in Cokeburg, Pa., which now…

A Toast to Tastemakers: Joel McCloskey '00

Joel McClosky ’00 and his business partner had the unusual distinction of opening the first brewery in a city that has only allowed alcohol sales since 2008. McClosky’s search for a teaching job led him to Asheboro, North Carolina, where he met Andrew Deming, the husband of a co-worker. When McClosky learned that Deming was a homebrewer, they began brewing together. While drinking the beers Deming made in his garage, the two started chatting about…