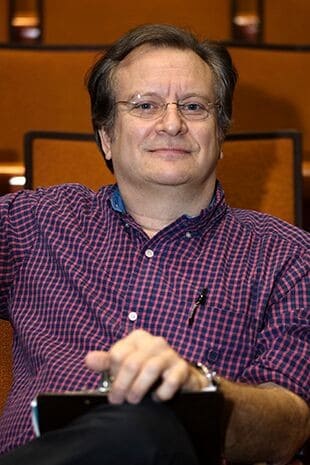 Dan Shaw is an assistant professor in the Department of Theatre and Communication and he is the designer/technical director of Olin Fine Arts Center. He primarily teaches courses in Theatrical Design and Technology, Practicum, Creative Dramatics and Children’s Theatre. Mr. Shaw has designed and tech’ed every production in the Olin Fine Arts Center since 1985. Like most of his theatre colleagues, he is also a writer and director. He is the founder of W&J’s Centerstage Players Theatre for Children; every year organizing a Summer Children’s Festival structured around an original adaptation of a classical work of literature. Despite acclaim and recognition, he feels awkward writing a third-person narrative of his accomplishments. Oh, and he has been known to tag-along with the Intersession London Theatre Trip. In addition to his departmental duties, he coordinates events at the Olin Fine Arts Center.